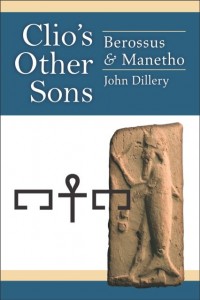 This week we focus on John Dillery’s shortlisted book, Clio’s Other Sons: Berossus and Manetho. Here are some of the questions the author seeks to answer:

‘How did the non-Greek members of the ancient civilizations of the Near East and Egypt view the expulsion
of the Persians and the conquest of their lands by the armies of the Alexander the Great? If the resulting
“Hellenistic” world was in some sense a meeting of Greek and non-Greek through a process of
Hellenization, how did this happen? What was Greek and what was non-Greek in the world views of the
local elites of Babylon and Egypt?

This book sets out to study in detail Hellenization, the processes
whereby Greek culture went from being the possession of a relative small number of people clustered
around the shores of the central and eastern Mediterranean, to being a tool of political and social
construction in many, many more places, and not a few quite far from the central Greek homelands.’

Look out for excerpts from the book and, with a bit of luck, an interview with the author this week.