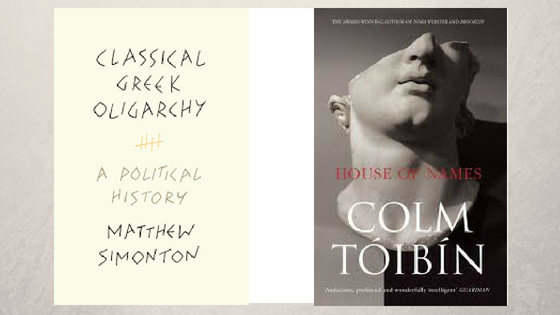 At a ceremony held at the London Hellenic Centre on 14 June, in the presence of HRH Prince Michael of Kent GCVO, President and Chief Patron of the Anglo-Hellenic League, Dr John Penney, chairman of the award judges, announced the judges’ decision that the winners of the Runciman Award this year were:-

Colm Tóibín for his book House of Names (Penguin/Viking).

Their awards were presented by HRH Prince Michael of Kent with Mr Dimitris Paraskevas in support, on behalf of Elias Paraskevas Attorneys 1933 who provided the £10,000 award fund. The League records thanks for the company’s indispensable support.

Also attending the event were the Archbishop of Thyateira and Great Britain, the Ambassador of Greece, the High Commissioner of Cyprus, Lord Butler of Brockwell and Lady Butler, Dr Neil MacGregor OM who gave an address, and many distinguished members of the Greek community in London, the academic and literary professions, and an exceptionally large number of other supporters of the Anglo-Hellenic League. We welcome the strength of support shown to the League in this occasion.

Mr John Kittmer, chair of the League’s Council, congratulated the winners and the authors of the other five books on the short list, saying: “I warmly congratulate Matthew Simonton and Colm Tóibín for being worthy recipients of the Runciman Award 2018. This year’s competition was remarkable, with excellent books submitted and short-listed. The strong field reflects the high quality of current writing in English about Hellenism in its many guises.”

Speaking about the judges’ assessment of the 47 books from which the winner was chosen, Dr Penney said: “The fascination of Greece, Greek history and Greek culture evidently remains undimmed, amongst scholars and laypersons alike, as this year’s splendidly varied submissions for the Runcimam Award clearly attest. … Given the overall quality of the field, all the short-listed books earn warm congratulations for their authors, and the judges had a hard time deciding between them. … We decided to divide the prize this year between two books of quite different kinds. Matthew Simonton’s Classical Greek Oligarchy tackles an unusual subject – a refreshing change from all those studies of Athenian democracy – and tackles it with great flair, his knowledge of political theory always apparent but never over-played. This is a compelling account of an under-explored topic, and a most enjoyable read. Colm Tóibín’s novel House of Names is based on the well-known story of Agamemnon, Clytemnestra, Electra and Orestes, but just as the great tragedians felt free to vary and develop the basic narrative in ways that suited their purpose, so here the story unfolds with inexpected twists and emphases. It is a gripping novel, beautifully written, and the atmosphere of disquiet, uncertainty and betrayal is truly haunting. Our congratulations to both these fine authors.”