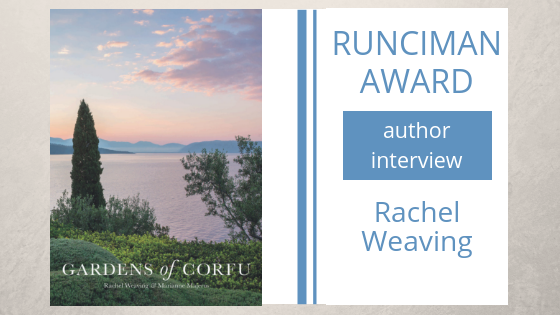 Rachel, thank you for taking the time to talk to us about your book, Gardens of Corfu.

What first attracted you to Corfu?

I first went to Corfu to visit friends, but quickly fell in love with its green landscapes, old Venetian architecture, and its welcoming people. As a gardener myself, I was intrigued by its reputation as “the garden island”. It wasn’t long before my husband and I decided to live there for part of each year. As I went in search of advice for my own garden, people showed me a whole range of beautiful gardens that had never been in the public eye: romantic old estates and village gardens and stunning contemporary works. I came to feel that these should be more broadly seen, and I wanted to try to place them in the context of the island’s multicultural history and of the landscape and wild flora that have influenced them.

What is the balance in your book between historical background, advice for gardeners, and aesthetic inspiration?

I would say that it’s about even between the first and the last, but light on advice for gardeners. Initially, knowing that a lot of new gardeners in Corfu would appreciate it, I wrote a long section on plants to grow and how to grow them, but had to leave this out because it would have made the book very unwieldy! Fortunately there are plenty of good practical books on gardening in Mediterranean climates. In preparing our book we carefully labelled the plants featured in the photographs, to allow gardeners to draw some inferences about how they can be used.

Who do these gardens belong to, and how did you get access?

Some of the garden owners are local people and others are from a whole range of places from Chicago to Cape Town, though mostly from Europe. Some live in Corfu year round; some are weekenders from Athens; and some spend only parts of each year at their Corfu homes and rent them to visitors for the remainder. Many of the owners whose gardens are featured I have never met, but all were kind enough to have confidence in the book, allowing us in to take photos and in many cases sharing stories about the gardens’ history. I’m very thankful to them for granting us access and, in some cases, to their designers and other associates for introducing us.

Are Corfu’s rich and complex history, and variety of habitats, reflected in the style of the gardens?

Corfu has always been cosmopolitan, open to the international flow of ideas and tied into world trade routes. The Venetians occupied it for five centuries, and were followed by the French and the British, before it joined newly independent Greece in 1864. Corfu’s old gardens do evoke the island’s history. Most were established at the country homes of the local nobility, at the heart of estates that produced wine, olive oil, and citrus fruit. Those that survive from the 18th and 19th centuries mainly follow Italian and Victorian English models, in keeping with the cultural orientation of their owners; they tend to have rather formal layouts, some with engineered stone terracing and balustrades, and exotic trees and shrubs, and some originally had areas for rose gardens and Victorian-style bedding plants. Most incorporated fruit and nut trees into their ornamental plantings. Many of the old gardens fell into decline after a land reform was enacted in the early 20th century and as the island’s economic base shifted to tourism, but several have been beautifully restored or brought up to date. Alongside the old gardens, Corfu has some highly distinguished contemporary ones, here again with design ideas coming from outside the island but then adopted locally. Works by Spanish architect Javier Barba—the iconic pool, inspired by a former quarry, at the Rothschild estate—and by Cali Doxiádis—at her estate in Gastoúri—have inspired a younger generation of designers. Unlike the old gardens, the new ones are very sensitive to the “spirit of place” and to the physical dictates of their sites. Like their counterparts in other Mediterranean regions, and the US and northern Europe, they seek to save on natural resources, especially water, and to preserve habitat for local species. Most are financed with resources earned outside the island rather than from local agriculture. And, not incidentally, they need much less work to maintain than their predecessors would have, at their height.

Do you have any special favourites?

That’s a really difficult question—there are so many! One is a beautiful contemporary garden designed by Thomas Doxiádis on a bluff overlooking the sea. The site is a hot, dry, south-facing slope, but Doxiádis has used plants that require very little water to create a magically cool oasis. You first approach the house on stepping stones in a wide gravel “river”, bordered by balls of dark green shrubs and frothy textured Erigeron. The growth is lush, with a lot of excitement coming from the shapes of the plants and their leaves, and from the contrasts between the brute rocks that are part of the original landscape and the sophisticated, strikingly simple lines and textures of the architecture of the house and outdoor living areas. There’s a powerful rhythmic energy in the planting, but a great economy of colour: mainly greens, white, and grey—except in a fun “tropical” section of the garden, cleverly created with drought-tolerant plants, where there are hot pinks, reds, and oranges. A very different favourite of mine is a vegetable garden in the south of the island, belonging to Elvira Myrilla and tended by her. Behind her 18th century village house the garden was mapped out maybe two centuries ago with stone-lined irrigation channels. Fruit trees thrive all the year but in spring the whole garden bursts with life, in immaculate rows of every kind of vegetable you can imagine, including many types of wild greens (hórta) that Elvira’s grandmother brought from the mainland when she moved to Corfu.

The beautiful photos in your book show gardens that offer beauty, peace, relaxation, and shade. Are some of them also productive? What is the Corfiot equivalent of a kitchen garden?

Yes indeed, a lot of the gardens are productive. Many of the urbanite second-homers with exquisitely designed gardens see them as places for reconnecting with the earth: they enjoy the ornamental aspects but also tend to dry their own herbs, grow their own tomatoes, collect the olives on their property to make oil, and make wine from their patio grapes. At least one of them keeps bees. We wanted to cover some of Corfu’s village gardens, too. As in much of Greece, village homes typically have a courtyard garden (avlí) that adjoins the house, usually with a grapevine and/or wisteria on a pergola. People use traditional terracotta urns, along with other pots and recycled feta cans, to hold flowers and herbs. Where there’s enough space, they grow flowers in beds alongside eggplants and tomatoes, peppers and beans. They also maintain vegetable gardens and family orchards (perivóles) that are often at a distance from their houses—the result of the fragmentation of land holdings over time.

Flowers are difficult to grow in hot, dry climates. Despite Corfu’s surprisingly high rainfall for a Greek island, dry summers must be a problem for amateur gardeners. How do they deal with the lack of water?

You are right—while Corfu has twice London’s annual rainfall, water for gardens is extremely short in Corfu summers. Gardeners take a range of measures to cope with drought, such as mainly growing native plants and their cultivated derivatives, collecting and storing rainwater, mulching planting beds with gravel or organic matter to slow down evaporation, or using drought-tolerant trees and shrubs to create shade and shelter from drying winds for more tender plants. Summer flowers are not normal in a Mediterranean climate and the old ornamental gardens don’t really feature them. Some people opt to grow brightly flowering climbers like Bougainvillea or Plumbago and to have just a few tender flowering plants in a favoured bed or in pots that get watered daily through the summer. Several of the contemporary gardens don’t try to have summer flowers at all, and rely on alternatives such as sculpted native shrubs and carefully pruned small trees as a compositional focus. Generally this looks more locally authentic and also works better in Corfu’s very bright summer light, which wipes out all but the brightest flower colours.

In general, do you think there is a greater environmental awareness than in the past? Did you talk about climate change, pesticides, bees, or other environmental concerns with the owners of the gardens?

Most of the garden owners and all the designers I spoke with have environmental concerns clearly in mind and their garden designs and maintenance practices to varying degrees reflect this. Most are trying hard to avoid use of manufactured pesticides, though recent outbreaks of citrus blackfly and palm tree beetle, arriving from outside the island, have made this very challenging. Most of the contemporary gardens deliberately include wild areas that celebrate spring and autumn wildflowers and provide habitat for wildlife. What disturbs many of us on the island, though, is when farmers economise on the use of labour by spraying weedkiller on the ground flora in their olive groves—with a high risk of poisoning the public groundwater supply as well as their olive harvests. The old way, of using grazing animals or “strimming” the grasses and wildflowers to reduce the fire hazard at the onset of summer, is not only more picturesque and better for local biodiversity but much safer for public health.

How has the style of garden on Corfu changed? Can you discern any particular influences in the contemporary gardens?

The contemporary gardens are generally much less formal than their predecessors, as one would expect, with their designs guided by the natural lie of the land and allowing natural features such as outcrops of rock and existing trees and shrubs to stay in place. In keeping with worldwide garden design trends, they almost all reflect a desire to be ecologically sustainable and to conserve water. They depart from tradition by relying heavily on native trees and shrubs, like cypress, bay, and myrtle, which are drought resistant as well as decorative. But one sees elements of continuity, too: the new gardens use some long-standing elements of local style: stone both worked and in the raw, wrought ironwork (often using traditional Venetian patterns), terracotta urns, certain cultivated plants (especially scented ones) that are recurring favourites, and a tendency we talked about earlier to incorporate fruit or other food crops into gardens that are mainly decorative.

Can the gardens be visited?

Joanna Fortnam at the Daily Telegraph asked me this about a year ago and at that time the answer was really “no”. But since then—inspired by her challenge—Corfu has started holding twice-yearly Open Garden Weekends, with a selection of private gardens across the island open to the public. Garden visiting hasn’t been a tradition on the island, but we were thrilled that the events last autumn and in early May 2019 involved many of the island’s gardens and attracted several hundred visitors. (Details are at the Facebook page, Corfu Open Gardens https://www.facebook.com/skoposdesigncorfu/).