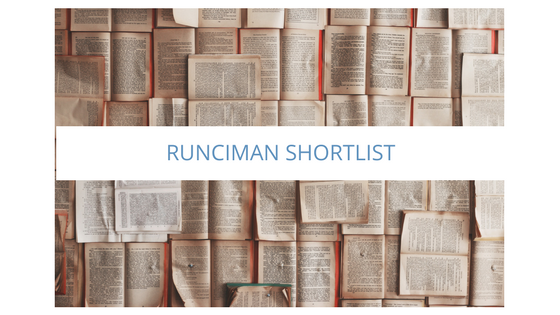 The short list for the 2017 Runciman Award was announced today by the Anglo-Hellenic League on behalf of the judges.

The books from which the winner will be selected are:

‘The books submitted for this year’s Runciman Award are a testimony to the enduring interest in Greek history and culture, which goes from strength to strength. It will be a delightful but also very challenging task for the judges to choose the winner from this short list, which showcases excellent and accessible research from the whole long span of the history and culture of the Hellenic world.’

The winner of the £9,000 award will be announced at a ceremony at the Hellenic Centre, 16/18 Paddington Street, London W1, at 7pm on Thursday 15 June 2017. All are welcome to attend, but please send names in advance.

For fuller information please visit our website specific to the book prize.

The aim of the award is to celebrate the finest new books written in English on Greek history and culture from the earliest times to the present, to reward good accessible writing (which Runciman’s works exemplified), and to promote wider knowledge of Greece’s contribution to civilisation and values.

The Anglo-Hellenic League was founded in 1913 and is dedicated to friendship and understanding between the UK and Greece. It is a Registered Charity (no. 278892). In addition to administering the Runciman Award the League organises events and activities which promote its aims. The office of the League is at the London Hellenic Centre.

More information about the short-listed books, the judges, and previous winners, is on the website; and about the Anglo-Hellenic League on www.anglohellenicleague.org. Please direct any further enquiries by email to the Runciman Award administrator Richard Carden (rcarden2@btinternet.com).