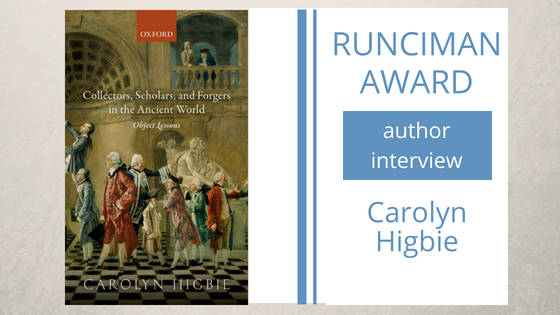 Carolyn, thank you for taking the time to answer a few questions about your book. Before we turn to Collectors, Scholars, and Forgers in the Ancient World: Object Lessons, I’d like to ask about your background. You studied at Princeton and at Oxford, and spent some of your school years in Britain as well as in the US. Did you come across differences in outlook, perhaps different approaches to the classics, which have fed into your academic work?

In my years in an English school and university, I did a lot more essay writing and reading of secondary sources than in my time in American colleges and grad school. At Oxford, I was expected to know the ancient texts, then to engage with the scholarship on those texts, while at Princeton, the interest was focused primarily on the ancient materials. At Princeton I sought out the archaeology program in order to have more evidence available for the kinds of questions I was interested in asking.

Do your research interests and those of your husband – also a classicist? – overlap? Or do you find it better for marital harmony to keep to separate tracks?

Hah! Our interests meet in the middle and then go in very different directions. At heart, I think we both love narrative, especially the Homeric epics, so that’s always where we begin and return. But I’m likely to veer off into thinking about metrical and word patterns, heroic names, and artefacts, while Timothy heads off into other cultures in search of story–Old Irish, Germanic, and J R R Tolkien, these days.

Nowadays, people collect art or objects for a variety of reasons: status, the thrill of the hunt, taking pleasure in beauty for its own sake, or as an investment. Are you a collector? Were the Greeks similar to us in that respect?

I used to have the tendencies of a collector and accumulated (I can’t really call my stuff a collection) fountain pens, murder mysteries, and books in general. But we reached a point in our household where not only were the bookshelves double shelved, but the store room was filled with the boxes, and there were stacks of books in front of some book shelves. I’ve rediscovered the public library and sold off my fountain pen accumulation (you can write with only one pen at a time, after all).

Until the Hellenistic age, I don’t believe the ancient Greeks collected in the way that we do or for the same reasons. If you look at the inscriptions recording the sale of the goods which belonged to Athenians who had their possessions sold, you see that even the very wealthiest households of the late fifth century BC didn’t have lots and lots of things, though they did own many slaves. Of course, after Alexander the Great expanded Greek awareness of the valuables to be found in the East and economic conditions allowed some at the very top of the scale to possess more and more, then we do see some collectors who might be familiar to us. Some of the Hellenistic kings pursued certain desirable statues and books.

You point out how the Greeks saw their attitude to wealth as contrasting with that of the Persians and other ‘barbarians’: the Greek super-rich donating their wealth to the gods, through temples and oracles, or putting on  public displays, while the barbarians hoarded fabulous amounts of treasure away in their palaces. Can we trace reflections of that different attitude to wealth in Greek society and politics?

One form of ancient Greek forgery seems to have no modern equivalent: forgery of oracles. Or should we see today’s ‘fake news’ as a linear descendant of that?

I think in some of the foundation myths of religions we can see a parallel to the forgery of oracles. To some non-Mormons, Joseph Smith’s story of the angel Moroni and the golden tablets which required a stone to help decode them, but which disappeared thereafter, does provide a parallel. Just recently in the New York Times, I read of another 19th-century religion, Kosmon, with a similar foundation story: its Bible, known as the Oahspe, was dictated to the founder by an angel who stood behind him and guided his hands on his typewriter. The appearance of the typewriter in this tale is just wonderful–an example of how the modern world intrudes into story.

‘Fake news’ certainly has a similar function to forged oracles, to provide support for a decision or a policy, but it lacks the religious association which would provide an authority to it.

Alexander the Great comes up repeatedly in this book. How would you summarise Alexander’s contribution to history on the cultural front? What was his legacy in attitudes towards cultural objects?

Alexander’s contribution to history on the cultural front is tied to his interest in using the past as a political tool. Because the past was present to Greeks in physical objects, not only things made by humans like vases, spear points, and bracelets, but also in the bones of humans and animals (often mythical), one had to possess and display these objects to support whatever claim was being made.

I don’t believe that Alexander himself cared much for objects themselves; we have stories of his jettisoning whole wagon trains of valuables while on campaign if they threatened the goals of the expedition. Alexander saw objects as a means to an end, which was expansion of his power, but his legacy as demonstrated by his lieutenants and their successors became one of valuing objects for themselves, especially objects which linked these new Greek kingdoms to a firmly Greek past.

As regards forgery and forged objects, you have seen some! Do you have any particular ancient Greek forged object that you particularly admire for its skill or craftiness?

How can one resist the cup which is the exact size and shape of Helen’s breast?

You explain that collectors, connoisseurs with gaps in their collections, provide a strong motive – and market – for forgery. But there is, as you also say, forgery and forgery: forgery intended to deceive, as against imitation intended just to produce a near-equivalent to the original. The Greeks seemed relatively relaxed about the latter. Perhaps we need a less pejorative word for it?

Yes, although I use the term “unintentional forgery,” it’s pretty clunky. I couldn’t come up with a better word and would be glad for suggestions. The term ‘forgery’ is pejorative and is used to dismiss an object or a text from consideration, but to do so removes so much material which can tell us about the culture it is a part of.

In talking of collectors, we don’t generally think first of book-collecting. It is good that you remind us of the importance book collecting had for Aristotle for instance, and the Alexandrians. Did any aspects of your subject come as a surprise to you as your work progressed?

I don’t know that I was surprised, but I was constantly pulled toward the stories about the villains–the forgers and those (both collectors and scholars) who used the forgeries for their own ends. These guys are always more interesting and fun to read about than those who try to expose them. I think I was surprised by the tight circle of collectors, forgers, and scholars, each of whom is inextricably tied to the other.

Finally, what’s next for you? Do you have another book in the pipeline?

I’m having great fun writing a paper on tomb robbing and temple looting. I’m trying to decide whether they are two expressions of bad behavior in ancient Greece, or whether they reflect differing impulses. What role does religion play in either, for example?