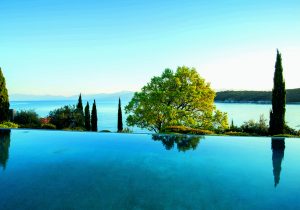 Greenest of the Greek islands, Corfu exerts a powerful magic. For those who seek them out, its natural landscapes and private gardens evoke a sense of wonder: expansive and intimate, restorative and energising, they offer joy and solace in a stressful world.

It was in pre-Classical times that Corfu emerged as the subject of a potent myth—a concept that the island is itself a garden. Scholars tell us that Corfu was Homer’s model for the island of the Phaeacians, where shipwrecked Odysseus found the garden of King Alcinous: ‘full of beautiful trees—pears, pomegranates, and the most delicious apples. There are luscious figs also, and olives in full growth. The fruits never rot nor fail all the year round, neither winter nor summer, for the air is so soft that a new crop ripens before the old has dropped… In the furthest part of the ground there are beautifully arranged beds of flowers that are in bloom all the year round.’[1]

Writing in the fourth century BC, Xenophon recorded the island as a fertile cultivated paradise.[2] Much later, perhaps inspired by descriptions from contemporary travellers such as Fynes Moryson[3] or George Sandys,[4] Shakespeare took Corfu as the basis for Prospero’s enchanted island in The Tempest.

Nineteenth-century visitors also fell under Corfu’s spell. In spring then, as now, they would have found Corfu carpeted with flowers: ‘This is the characteristic scene for miles: ferns, asphodels, myrtles, hyacinths, cyclamen, irises, anemones, crocuses, and violets and an endless variety of other wildflowers grow under the trees in great profusion.’[5] British artist and writer Edward Lear, who spent almost four years on the island, wrote of ‘gardens dark with orange and lemon groves, their fruit sparkling golden and yellow against the purple sea and the amethyst hills.’[6]

The building of two nineteenth-century palaces helped popularise Corfu’s image as a garden paradise. Mon Repos, built by British High Commissioner Frederick Adam, was surrounded with English-style rose gardens, and by 1830 its grounds contained a botanical garden with four thousand plants, including trees from parts as distant as Australia. Not far south of Corfu Town, Empress Elisabeth of Austria built the Achílleion Palace to reflect her dreams of Greek antiquity: ‘a palace with pillared colonnades and hanging gardens, safe from prying eyes—a palace worthy of Achilles.’[7] Her gardens were planted with exotic trees and shrubs, many of them quite new to Europe at the time; several of these survive today.

Closer to our time, artists and writers both Greek and foreign have helped the island weave its magic. Corfiot Angelos Giállinas, Greece’s most famous watercolourist, painted scenes of olive and citrus groves and gardens with cypresses and irises, sometimes against the background of a luminescent sea. American painter John Singer Sargent summered at the Villa Sotiriótissa in Kontókali in 1909 and 1910. In the luxuriant garden there, he captured the indolence of summer days—but also the stark, startling, and peculiarly Greek quality of Corfu’s summer light. British novelist Lawrence Durrell later described this same light: the ‘dancing magnesium-flare quality of the sunlight blazing on a white wall; in the depths of the light there is blackness which throbs with violet—a magnetic unwearying ultra-violet throb’.[8] Both Lawrence and his naturalist brother, Gerald Durrell, wrote of the piercing beauty of the island that Gerald called the ‘Garden of the Gods’.[9]

In Corfu’s gardens of today, the myth lives on. Their richness and diversity might seem surprising in an island so small. Partly it stems from generous winter rainfall, mild winters, and a large variety of microclimates and soils, which allow the cultivation of a wide range of plants. But also it stems from Corfu’s unusual social and cultural history. Under successive regimes—Venetian, French, British, and Greek—Corfu’s prominent residents have kept in touch with artistic developments and garden fashions in European cultural centres and seen that these could be replicated and adapted locally. To be sure, at some of the island’s old estates, only the vestiges remain of formerly grand gardens, their ruined walkways and staircases shrouded in wisteria and mystery. But other old estate gardens are still lovingly cared for and several have been sensitively brought up to date. And though parts of Corfu are now marred by the ugly trappings of mass tourism, a crop of remarkable new gardens has been created in the past twenty years. On rocky coastal promontories and on the outskirts of hillside villages, dream homes of well-to-do Corfiots and Athenians perch next to those of artists, writers, celebrities, and businesspeople from across Europe and beyond. Their gardens reflect the talent of contemporary international designers and increasingly take inspiration from their natural surroundings, seeking to complement and enhance the natural beauty of the island landscape. 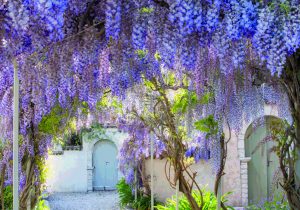