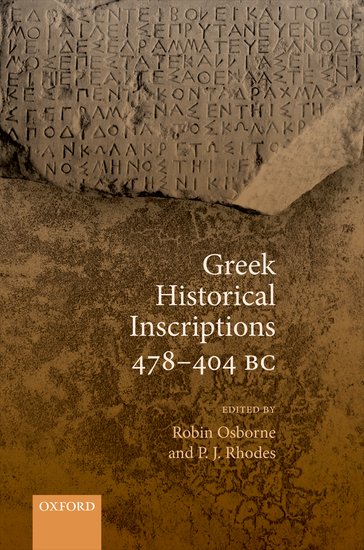 Elis honours a Spartan and a Euboean, c.450

Elean lettering of the middle third of the century, in a spiral of four coils beginning at the outside. Non-stoichedon.

The Eleans made Athanadas and Rhinon Eleans, themselves and their descendants; and they shall enter whatever tribe they wish, and shall share in the epoikia in Sparta and Euboea, and shall receive the theoria – – – Athanadas (shall receive land in the region of?) Cicysium also.

4 The tablet is sacred to Zeus.

This is one of a number of tablets of similar form and of similar date from this part of the Peloponnese: SEG xl 392 is a grant of citizenship by the Triphylians, in the area south of Elis proper but claimed by the Eleans, and IG v. ii 387 is a list of proxenoi from Lusi in Arcadia. Siewert suggests that the model for this kind of circular tablet was the ‘discus of Iphitus’ at Olympia (Plut. Lyc. 1. ii, Paus. v. 20. i).

The honorands receive not only citizenship but theorodokia, the right and duty to act as official host to sacred envoys (which presumably involved expenditure as well as help of other kinds)—in this case envoys from Olympia, announcing the Olympic truce and games. There are three later inscriptions which confer both citizenship and theorodokia: I. Olympia 39 = Buck 66, conferred by Elis on Damocrates of Tenedos, late third–early second century; also ISE 41, by Argos on Alexander of Sicyon, first half of third century; IG v. ii 394, by Lusi on Mnasilaus of Amphissa, c.200. Our inscription is the earliest text to use the expression ‘receive the theoria’ (it recurs in SEG xxxvii 340 = R&O 14. 10, early fourth century); the earliest occurrence of the word theorodokia is in I. Olympia 36 = SIG3 171. 2, of 365–363. Pind. Isthm. ii. 23–4, perhaps of 470, refers to spondophoroi, ‘truce-bearers’.

Earlier texts which might mention such grants are in any case rare, but it seems to be in the fifth century that we first encounter formal grants of citizenship to men from outside a community who are not the sons of citizens. In Athens Solon in the 590s is said to have allowed citizenship to exiles from elsewhere and to craftsmen (Plut. Sol. 24. iv), but this could have been done without formal grants, and Pericles’ citizenship law of 451/0 (e.g. Ath. Pol. 26. iv) may have been the first formal definition of the qualification for Athenian citizenship. Early in the fifth century the seer Teisamenus of Elis and his brother are said to have been the only men ever made citizens by the Spartans (Hdt. ix. 33–5). As poleis became more institutionalised, they became more likely to have defined criteria for citizenship and formal procedures to confer it as an honour on men who did not satisfy those criteria.

The two honorands here are made Elean citizens although they do not reside in Elis. They are to be treated as if they were Elean epoikoi (‘settlers’, as opposed to metoikoi in Athens who might be long-term residents but were not necessarily so), who formed a distinct sub-community, in their own cities. These bodies will consist primarily of Elean seers living there (cf. Tisamenus and his brother in Sparta, above), who are probably citizens both of Elis and of the city in which they have settled, but these men, probably priests of Olympian Zeus, become additional members, as adopted citizens of Elis who presumably retain citizenship in their home cities. Over time citizenship was increasingly given as an honour to men who would not live in the honouring city and exercise their rights, but incorporation in a body of expatriate Eleans would give some substance to the honour. The Euboean city is not specified: Str. 448/x. i. 10 mentions Eleans who went as epoikoi to Eretria; but Chalcis is said originally to have been called Euboea (Hecat. FGrH 1 F 129), and probably here the reference is either to Chalcis or to the island as a whole.

Cicysium is said by Str. 356–7 / viii. iii. 31–2 to have been the greatest of the eight cities of Pisatis, the region around Olympia, which by this time formed part of the state of Elis (J. Roy, in Hansen (ed.), The Polis as an Urban Centre and as a Political Community, 298). However, until this text was published there was no evidence for its existence before the hellenistic period (J. Roy, in Inventory, 491 n. 2, not knowing this text). Normally only citizens could own land in a city’s territory, so a grant of land there would give substance to Athanadas’ status as citizen.