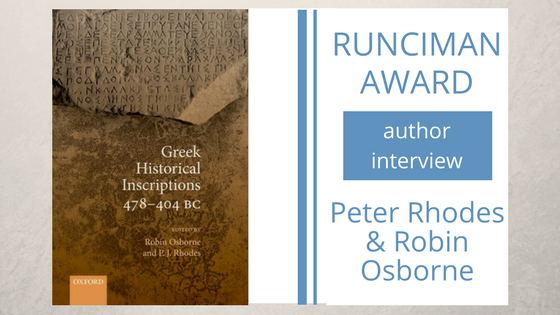 Professor Rhodes, Professor Osborne, thank you for taking the time to answer a few questions about your book, Greek Historical Inscriptions 478-404 BC. This is not your first collaboration; the companion volume, Greek Historical Inscriptions 404-323 BC, was published ten years ago. How did you approach writing these two books? Do you work separately on the inscriptions that match your particular fields of expertise and interest, or do you draft the translations and commentaries together?

We start by discussing what the overall content of the volume should be, and then we divide the primary responsibility for each text between us. Each of us has particular enthusiasms, and we have slightly different expertise, so we tend to divide accordingly. PJR tends to take inscriptions involving state finance and foreign policy, along with things that have a lot of procedural interests; RO tends to take things that involve religion or social and economic history – though all these lines get blurred in various ways. The person with primary responsibility produces the text and the first draft of the translation and commentary, and then passes to the other who comments, adds, changes, etc. In the course of the work we each end up revising everything several times.

New material has come to light since Meiggs and Lewis’s A Selection of Greek Historical Inscriptions to the end of the Fifth Century (1969). Can you tell us more about the finds? Do these inscriptions come from a small number of sites or were they scattered? How did you go about researching them? Do they tell us anything new about life in the 5th century BC?

Fortunately there is a wonderful series of publications, Supplementum Epigraphicum Graecum (SEG) which carefully collects all new material, whether related to known texts or publishing new texts, each year, so we are able to check what has appeared through those volumes. New material is found in many places, and there is no real pattern. One of the most striking new texts this time is a text on metal from the Sicilian city of Selinus. This is particularly concerned with sacrifice in relation to the dead and with what one does religiously in relation to a person who has committed homicide. It is interesting for its form (it was made to swivel in the middle and is written one way up on the left and the other way up on the right) as well as for the content – which has quite close connections with a text from Cyrene which we published in our other volume. In this case the text, which is inscribed on lead, emerged on the antiquities market and was initially bought by the J. Paul Getty Museum, but has now been returned to Italy. Another new text is the treaty between Sparta and the Erxadieis (cf. next answer), and there are important new fragments of the text listing contributions to a Spartan war fund, and of the Athenian honours for a man called Heraclides whose identity used to be uncertain. Also advances in scholarship have given us good reason to reconsider the dates, and therefore the contexts, of several of the Athenian texts.

Inevitably, you have had to be selective in deciding which inscriptions to include in your book. How did you decide what material to omit (even if it appeared in previous collections of texts) and what was significant enough to include? Why have you chosen to include more material from outside Athens? Can you point the non-specialist to any particularly noteworthy or significant inscriptions?

We allowed ourselves a few more inscriptions from this period by deciding to cover in two volumes what our predecessors, David Lewis and Russell Meiggs, had covered in one. We have tried to reflect the subjects that our colleagues want to teach, which is one of the reasons why we have presented a lot more material relevant to Greek religion, for which inscriptions are a particularly important source. But we have also given more space to social and economic history, and to places other than Athens. We concentrate mostly on cases where the text is relatively well preserved, so that issues of restoration do not dominate the discussion. I think we probably each have our favourite inscriptions, but among the particularly interesting are a treaty between Sparta and a previously unknown community of Aetolians, the Erxadieis, and a very detailed law about funerals from the island of Ceos, with complicated instructions about purification. But we also included for the first time an inscription which consists almost entirely of names, and which lists the crews of a number of triremes, identifying the rowers as citizens, free non-citizens, and slaves. This inscription tells us not only a lot about the manning of the Athenian navy, but about how allies of Athens served in the Athenian navy and how important slave rowers were.

To what extent does your choice of texts reflect shifts of emphasis in the study of Greek history today?

Certainly a number of the inscriptions which we include were known to Meiggs and Lewis but not considered by them significant enough for inclusion; and, as we remark above, we have thought it right to increase the number of non-Athenian texts. Our inclusion of the gravestone of the priestess of Athena Nike, for instance, certainly marks the burgeoning interest in both religion and women. But the changing emphasis of scholarship is as much reflected in the style of our commentary – and our inclusion of translations, necessary to help today’s students as they were judged unnecessary by Meiggs and Lewis and by their predecessors – as it is in our choice of texts.

What is the significance of the dates (478-404 BC)? Does the cut-off date of 404 BC, the end of the Peloponnesian War, mark a change in the nature of the inscriptions you have included?

The end date for this was determined by the starting date of the volume which we published in 2003. But there are good epigraphic reasons for having a break at that point, since particularly in Athenian epigraphy there is a significant change between what gets written in the fifth century and what in the fourth – partly reflecting the Athenians‘ loss of their empire. On a utilitarian level, many school and university courses end in 404. As to the starting date, that too is primarily explained by the history of the Athenian empire – starting in 478 gives us a chance to have everything related to the Delian League in a single volume. More than that, it has long been recognised that there was a ‘revolution in bumph’ in Athens in the 450s, and the texts which we will include in our archaic volume will have a very different flavour from those in this volume.

Your book includes inscriptions relating to major events, such as the building of the Parthenon, and the Athenians’ ill-fated Sicilian expedition. Are there major events that are only known to us thanks to inscriptions? Are there ways in which inscriptions can give us more valuable information than written histories?

In a sense inscriptions are themselves events. That is, the decision to put something on stone and advertise it, changed the status of the event involved, whether we are dealing with an Assembly decree or someone’s death. Many of our texts attest to actions that cities took about which we otherwise know nothing – the Spartan treaty with the Erxadieis is a good example. When we get outside Athens, almost all our history of the internal politics of cities has to be pieced together from inscriptions – the inscription we include here about property disputes at Halicarnassus would be a good example. Inscriptions have the advantage that in the normal course of events they are not written with foresight – that is, decisions get inscribed before the consequences of those decisions are known – whereas literary texts are almost always written with hindsight.

What is the importance of this epigraphic material for students reading, say, Thucydides?

Inscriptions help us understand Thucydides in two ways. They frequently confirm the accuracy of what he tells us, and so increase our confidence that when he tells us about an event he will have given an accurate account. One of our texts, an alliance made in 420 between Athens and some Peloponnesian states, is in fact quoted by Thucydides — with small verbal differences which may be due either to himself or to his following a copy which differed in those respects from our copy. But inscriptions also tell us something of what Thucydides left out. This is not simply a matter of aspects of history in which he was not very interested, but things like, notoriously, the way the Athenians tried to increase their tribute demands on their allies in 425. Scholars have long, and rightly, been astonished that Thucydides did not think that this decision should be recorded. So we get a much better sense of Thucydides’ selectivity – though of course the reasons for that selectivity, and whether or not Thucydides was writing an ‘apologist’ history for Athens, are matters that inscriptions do not answer and which scholars will long continue to debate.

What are the challenges of producing a book like this (the research, the choice of materials, the writing process,…)? What kinds of skills does an epigraphist need?

The challenges really involve predicting what one’s colleagues want and need to know, both for their own research and for their teaching. Writing a commentary on any text involves not simply telling a story about that text, but anticipating all the stories that others might want to write about that text, and trying to give them the materials to write it. Inevitably we do not manage to pick up everything, but with past scholarly discussion as our guide to what others have wanted to use a text for in the past, we endeavour at least to bring out how a text has already been used, as well as, we hope, indicating further ways in which it might be used. The challenges here are less technical epigraphic challenges – the texts we choose have generally been well worked over by others from the technical point of view – but the challenges of dealing with texts which, although all written on stone or metal, cover a very wide range of subjects as well as of geography.

What was the most rewarding part of writing this book? You are both prolific authors; is your next project already in the pipeline?

What is most rewarding is discovering colleagues actually using the book in their teaching and reporting that they have been able to teach topics which they had not previously been able to teach because we have put the material into their students’ hands in an accessible way for the first time.

Although we both have other things to write in the next year, our next major project is to produce the companion volume to this for the archaic period.